Though it is a relatively well-known fact that vinyl sales have increased massively worldwide over the last decade or so (there’s been an 86.5% rise in record purchases since 2012 in the U.K.) there’s still a long way to go before records become the dominant music format again.

Of course, it is likely this may never happen at all. As is the norm nowadays we are presented with the ‘streaming’ argument- why would people want to spend £20 on one album, when they can pay half of that price per month and stream any number of albums they want, whenever they want?

At this point, vinyl collectors will no doubt find multiple reasons popping into their heads- the better sound quality of records, for instance, or the fact that when you buy a record it is far more of an ‘experience’ than simply downloading some files. They will also no doubt know what it is like to have to defend their preferred format against, amongst other things, arguments of the impracticality and expense of vinyl, never mind fend off the ‘hipster’ reputation that now seems to befall anyone under the age of 35 who has a record collection.

Despite all this, however, the mere fact that vinyl sales have grown at all is fantastic- and important- news. December 2018 saw music giant HMV go into administration, and although there have been reports of a brighter future for what was once a staple of our high streets, multiple branches of the company have still had to close.

It is therefore more important than ever for our independent record shops to keep the metaphorical vinyl fire burning- helped along by celebrations like Record Store Day (the third Saturday of April every year) and the much-anticipated list of new releases and re-releases that comes with it, which seems to become more varied and eclectic every year.

Keeping this in mind, to help you pick the best of the bunch, here is Vinyl Collector’s list of five essential records for Record Store Day 2019...

“I don’t think of our songs as being unusual but I suppose they are” said Associates lead singer Billy Mackenzie in 1982. And when you actually stop and think about what makes up the band’s sound, you realise he’s probably right; the idea of restless, fidgety drums acting like an unscratchable itch, an ebb and flow of tidal waves of echoing guitars, relentlessly noodling bass lines that weave their way in and out of layer upon layer of full-on pianos and synthesisers, all framed by the operatic extravagance of a male tenor vocalist does, admittedly, sound rather unusual in principle.

But for a brief moment in 1982 this did not bother the British public. With the release of their second studio album Sulk, the Associates found themselves catapulted headlong into the limelight- partly due to their ‘unusual’ Top of the Pops performances- with the album named LP of the year by Melody Maker and both singles taken from it reaching the U.K. top 20.

And whilst the first of those singles, ‘Party Fears II’ gave the duo their highest chart position (reaching number nine in January of that year), it was perhaps the lesser hit, ‘Club Country’, that showcased Associates at their manic, ‘unusual’ best.

Now, the latter- a powerful, slice of classic early ‘80s ‘new pop’- is being reissued exclusively for this year’s Record Store Day, not only on white vinyl, but also including the single’s original b-sides and a rare demo version of the track available for the first time on record.

‘Club Country’ is a gloriously melodramatic piece of music from a tragically underrated band- making it all the more essential that this 12” re-issue should be on your Record Store Day wishlist.

Trout Mask Replica is a difficult- but ultimately rewarding- listen. The fusion of prog, blues and jazz and country found here often proves too much for even the most discerning of music fans, but once one has a grasp on the attitude with which both artist (born Don Glen Vliet) and producer (Frank Zappa) approached this opus of a double LP, the fact that it seems to make very little sense becomes the album’s appeal, rather than its downfall.

A favourite of the legendary radio DJ John Peel and having been out of print on vinyl for nearly a decade, it’s the influences Trout Mask Replica had, and indeed still has, on various genres of music that make this remaster (complete with the clearest reproduction of the sleeve’s cover photo since its 1969 release) an essential buy for Record Store Day.

Created by ex-Panic! At The Disco member Dallon Weekes, what idkHOW (short for ‘I DONT KNOW HOW BUT THEY FOUND ME’) really have going for them is their concept- a band who were lost to the mists of obscurity in the early 1980s and who are only just being rediscovered via the means of social media and YouTube. As a reflection of this, the songs on this EP (their debut, here found on limited edition 12” red vinyl) are rambunctious, synth-laden gems, with strong melodies and even stronger production (particularly ‘Do It All The Time’ and ‘Choke’) that give off an obviously-intended ‘nostalgic’ vibe.

Admittedly, listening to the release in its entirety is at times a little like eating a rich bar of chocolate or an entire bag of sweets- initially there’s a glorious sticky-sweetness about the whole affair, but incessant consumption in a small space of time may begin to feel like overindulgence.

And yet although the music itself might not be for everyone, all the time, as a package this EP deserves the label of ‘essential’ purely for the originality of the entire project as a whole.

Despite some initially mixed reviews from critics, ‘Bohemian Rhapsody’- which tells the story of Queen and the band’s often-troubled lead singer Freddie Mercury- is now officially the highest-grossing biopic of all time. Though admittedly there are significant historical inaccuracies within the film, no one can deny that it features a lot of Queen’s music, prompting what appears to be a renewal of interest in the band’s back catalogue.

It is no surprise then, that ‘Bohemian Rhapsody’s soundtrack has been released in various forms over the last few months, although it’s this release (a two LP picture disc set created specifically for RSD 2019) that is one of the more interesting variations.

What makes this release essential, however, is the never-before-released audio from Queen’s legendary Live Aid set, which should be heard by all fans of rock music; it showcases a band at their peak with a frontman who could command the attention of a stadium packed full of people like they were putty in his hands, making for what is surely a masterclass in live performance.

Boasting perhaps some of the most well-known chorus lyrics of all time (‘New York, London, Paris, Munich…’), ‘Pop Muzik’ was released in the U.K. in early 1979, and whilst it only reached number two in this country (kept off the top spot by Art Garfunkel’s ‘Bright Eyes’), it went on to hit number one in ten countries worldwide.

However, despite that instantly recognisable intro and refrain, few people know that the record was originally written in an R&B/funk style, the demo recording of which- alongside the original and two other versions- can be found on this 10” RSD reissue.

Perhaps because of the intentionally throwaway lyrics- described by Robin Scott (who recorded the track under the alias of M) as a deliberate attempt at writing a ‘simple, bland statement [to] summarise the last 25 years of pop...’- the track’s influence on much of the synthesizer-driven music that was to dominate both the U.K. and the US charts in the 1980s, and beyond, is often forgotten.

This reissue therefore should not only an essential buy for fans of the music that was influenced by and that followed this record, but for fans of ‘pop music’ in general.

For more information on Record Store Day and a full list of releases for 2019, please visit the official RSD website: https://recordstoreday.co.uk/home 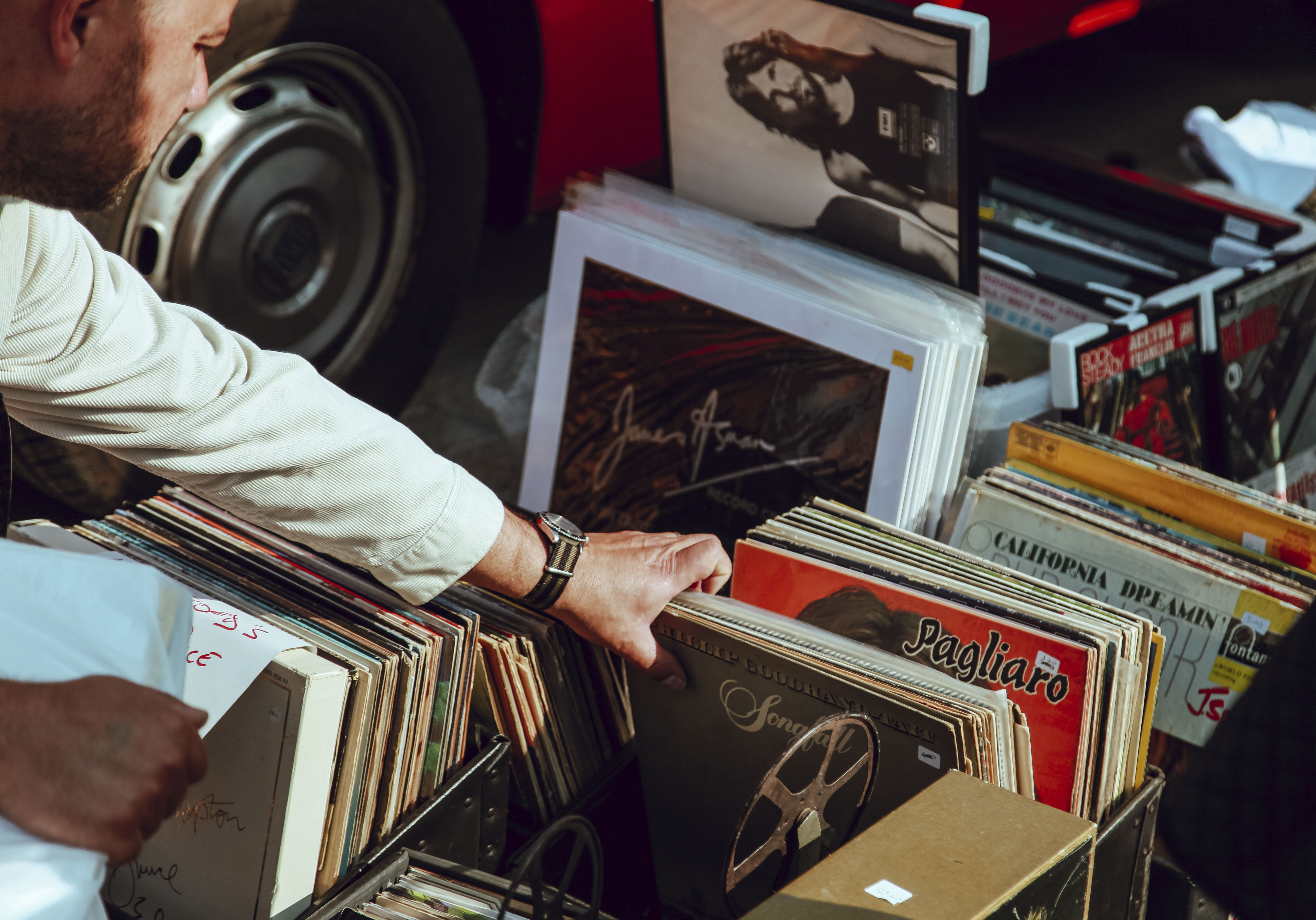